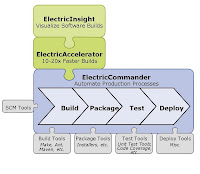 US startup Electric Cloud is looking to Europe for its international expansion to tackle the complexity of embedded software.
With different versions for different products, different countries and different operators, companies like Nokia can have up to 3000 different versions of the software for their phones. This is all constantly being updated and needs to be managed to make sure they all operate correctly and are put into the right phones.
The company has developed technology for handling all these different variants and their updates, which can be daily. The company is focussing on silicon chip and equipment suppliers in the mobile phone arena.
The ElectricCommander tool manages the software builds, while the ElectricAccelerator uses patented technology to accelerates the builds by spreading them across multiple computers in the network, cutting build times from hours to minutes and saving significant time with thousands of builds. The ElectricInsight tool provides visibility into the builds by mining the information produced by ElectricAccelerator to provide an easy-to-understand, graphical representation of the build structure for performance analysis and optimisation.
Companies such as Agilent Technologies, Force 10, Intuit, Kyocera, LG, LSI Logic, Mercury Computer Systems, Motorola, Qualcomm, and Samsung already use the tools in the US and the company has set up its European headquarters in Oxford, UK and has appointed Andrew Patterson its European business director.
Posted by Nick Flaherty