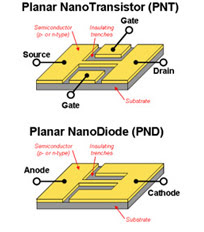 Nano ePrint in Manchester has secured a grant for Research and Development from the UK's Northwest Regional Development Agency (NWDA) for a £390k project to demonstrate the world's first printed programmable logic device.
This will be based on developments led by Ian Barton, previously Managing Director of Silistix, who joined Nano ePrint as Vice President of Engineering in May. Ian brings significant experience in the management of integrated circuit design and is leading Nano ePrint's engineering team in the design and production of printed programmable logic devices. Silistix, another spinout of the University of Manchester, develops network on chip technology.
Nano ePrint was formed in 2006 following pioneering research at the University of Manchester in the UK that allows planar nanoelectronic circuits to be built in a single layer of semiconductor via single-step patterning. Nano ePrint’s devices achieve very high speeds while dramatically reducing circuit size and simplifying manufacture. Nano ePrint has also developed a configurable circuit architecture to deliver the world’s first printed programmable logic circuits, allowing one design to simultaneously address multiple applications, opening up prospects in low-cost, high-performance printed electronics across a wide range of markets.
Posted by Nick Flaherty