The end of plasma 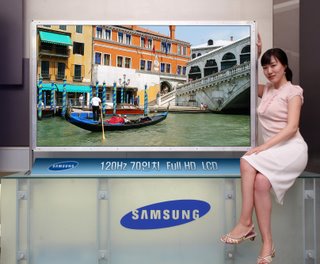 I couldn't resist - this is stunning.

Samsung has developed a 70in LCD hi def screen that must mark the death knell of the plasma screen. Even though Samsung can probably only make one at the moment, it doesn't matter. The technology wil scale and the price will come down and plasma will not be able to compete.

The screen is being shown at the International Meeting on Information Displays (IMID) 2006, which will open in Daegu, Korea on August 23.

However, it may not be seen to its best ability of 1080p unless some of the HD films on the coming Blu Ray format have that as an option. But the conical viewing angle of 180 degree visibility will help for larger audiences.

With production in the first half of 2007, it is definitely competing with plasma and should provide a clearer display with a longer lifetime.