NXP pushes down power on microcontrollers

NXP has launched a family of microcontrollers which the company says provides up to 10 times the performance and a third of the power of its previous entry level LPC devices. 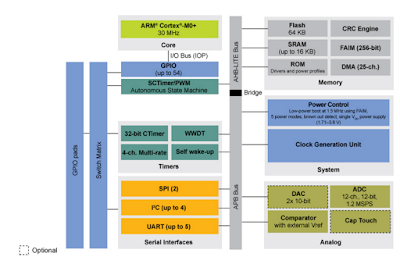 The LPC84x family is the latest addition to its rapidly expanding LPC800 series of 30MHz Cortex-M0+ based microcontrollers. The controller has a current consumption of 90 µA/MHz in its low-current mode using the Free Running Oscillator (FRO) on the chip up to 30MHz.

“We’re extremely excited to be ramping the LPC84x family into production together with our broad base of customers,” said Geoff Lees, senior vice president and general manager of the microcontroller business at NXP. “This new family further extends LPC800’s unique innovative features over aging, proprietary 8-bit MCUs.”

As ever it is peripherals that are the key element in the choice of device, and the LPC84x family builds on its innovation with provides a unique way to configure the device without CPU intervention. Upon power-up, its fast access initialization memory (FAIM) allows the clocks of the LPC84x microcontroller to be started in a low frequency (1.5MHz) mode, keeping startup current consumption to a minimum. The IO ports can come up immediately and in the desired configuration, eliminating any potential termination issues with attached devices such as MOSFETs.

Within the family, the LPC845 offers an additional flexible capacitive touch-sensing, which can operate in sleep and deep sleep modes, allowing for very low power performance. The LPC845 solution has been designed to handle up to nine capacitive buttons in different sensor configurations — such as a slider, rotary or a button matrix — along with supporting software libraries and tools to support additional features, including auto-calibration for best performance in noisy or wet environments, reducing false triggering. Evaluation kits and software packages available starting in Q3 2017.

Like the other LPC800 families, the 84x includes the 32bit State-Configurable Timer with PWM, advanced DMA, autonomous serial interfaces and patented IO switch matrix, where any peripheral function can be assigned to any of the 56 GPIO, enabling low-cost PCBs.

It provides developers a path to 64 KB of integrated flash memory and 16 KB SRAM, with a 12-bit ADC, dual 10-bit DAC, and a selectable output free-running oscillator (FRO).

Available in a scalable family of packages, including LQFP64, LQFP48, HVQFN48 and HVQFN33, the LPC84x MCU family of devices, along with supporting peripheral drivers, example software and tools, including the LPCXpresso845-MAX development board (OM13097), are available now.