Toshiba squeezes 1.5Tbytes of data into one package (and releases a 1TB embedded drive)

Multi-level NAND flash is not a great technology for many embedded designs, but Toshiba has managed to stack 16 high density die into a package that stores 1.5Tbits of data. 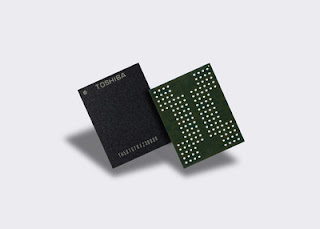 The latest BiCS device uses a 4-bit-per-cell, quadruple-level cell (QLC) technology for the first time that enables larger die capacity than the company's third-generation 512Gb 3-bit-per-cell, triple-level cell (TLC), and pushes the boundaries of flash memory technology using a 64-layer stacked cell structure. This achieves the world's largest die capacity at 768Gbits/96GBytes. This is up from 128Gbytes in a package back in 2011.

The QLC flash memory also enables a 1.5-terabyte (TB) device with a 16-die stacked architecture in a single package, up 50% on the 1TByte package.

Increasing the number of bits-per-cell by one within the same electron count requires twice the accuracy of TLC technology, and Toshiba has combined its advanced circuit design and leading 3D flash memory process technology to overcome this challenge, successfully creating the world's first QLC 3D flash memory.

This could be especially beneficial for datacentre designs.

"The introduction of QLC technology sets the stage for solving many of the challenges facing datacentres today," said Greg Wong, founder and principal analyst at Forward Insights. "For datacentres, QLC SSDs can be an excellent design choice for reducing power consumption and lowering footprint. Additionally, as the push for higher capacity HDDs leads to an increase in areal density and drives up the weight per successive generation, it has become common to see a 42U rack only half-filled due to exceeding maximum weight or power supply. Flash memory-based storage solutions weigh less and give improved power efficiencies, enabling datacentres to achieve greater rack capacity."

"From SLC to MLC and MLC to TLC, large technology shifts are often met by industry resistance and the introduction of QLC is no exception," said Scott Nelson, senior vice president of Toshiba America's memory business unit, which competes with Samsung. "There will always be demand for compelling storage solutions that bring higher densities and produce a favourable cost/performance equation – our QLC technology falls squarely into that sweet spot. History has proven us right in the past when it comes to our visionary flash memory roadmap, and we fully expect QLC BiCS FLASH to continue our industry-leading track record."

Samples began shipping this month to SSD and SSD controller vendors for evaluation and development.

This compares to 6Gbit/s SATA storage, giving 5.4x sequential read performance and up to 3.8x sequential write performance with a maximum interface bandwidth of 32 GTransactions/s.

The XG5 also has an SLC cache to accelerate burst type workloads, such as those experienced routinely on Windows -based PCs, as well as improved standby power consumption reduced by over 50% to less than 3mW. 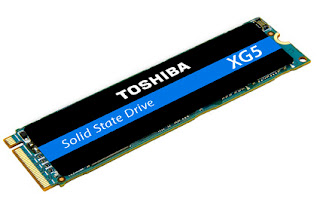 The XG5 Series SSDs will be available in three capacities, 256GB, 512GB and 1024GB, all on a single-sided M.2 2280 form factor. Self-encrypting drive (SED) models supporting TCG Opal Version 2.01 will also be offered. OEM customers will have access to limited quantities of qualification samples of the XG5 series, with shipments gradually increasing in the second half of 2017.