Qualcomm Technologies has successfully made over-the-air (OTA) 5G NR data calls in both the mmWave and sub-6 GHz spectrum bands with Nokia. 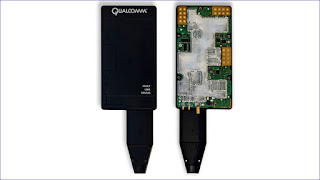 This follows the first 5G call on a commercial network by SK Telecom in S Korea and a 5G-AI Machine Vision system that started on 1st December. Myunghwa is an auto parts company based in Banwol Industrial Complex, Ansan, Gyeonggi-do and started using the 5G network to transmit high-resolution, multi-angle photos of auto parts on the conveyor belts taken by 12 million-pixel cameras to a cloud server where machine learning algorithms scan the photos to check for defects.

“5G opens doors to infinite possibilities beyond our imaginations. As the ICT leader that has spearheaded the advancement of mobile communications from CDMA to LTE, SK Telecom will once again create a new future with the best 5G network,” said Park Jung-ho, SKT CEO.

Self-driving cars began test-driving on public roads in Siheung as well as test tracks of ‘K-City,’ a large-scale test site for autonomous vehicles located in Hwaseong, Gyeongg-do using the 5G network. The cars were able to exchange surrounding information with the control centre and traffic lights.

Back in February 2018, Nokia and Qualcomm Technologies first completed key 3GPP-compliant 5G NR interoperability testing in the 3.5 GHz and 28 GHz spectrum bands using a commercially available Nokia AirScale base station and device prototypes from Qualcomm Technologies. The OTA calls are key steps in enabling customers in the 5G ecosystem to launch commercial networks and mobile devices from early 2019 onwards, in the United States, Korea, Europe, Australia, Japan and China.

“These successful data calls are a significant step in making 5G a commercial reality in early 2019, and this milestone with Nokia will help enable 5G network deployments across various operators and regions around the world,” said Durga Malladi, senior vice president and general manager, 4G/5G, at Qualcomm Technologies.

“These key milestone tests with Qualcomm Technologies show the flexibility and capabilities of our AirScale radio access technology to deliver on the promise of commercial 5G,” said Tommi Uitto, president of mobile networks, Nokia. “We continue to collaborate with Qualcomm Technologies to ensure our customers can unleash the power of their commercial 5G networks, to support the many new and diverse applications that will meet the demands of people and connected things, as they begin to launch commercial services in early 2019.”
Posted by Nick Flaherty