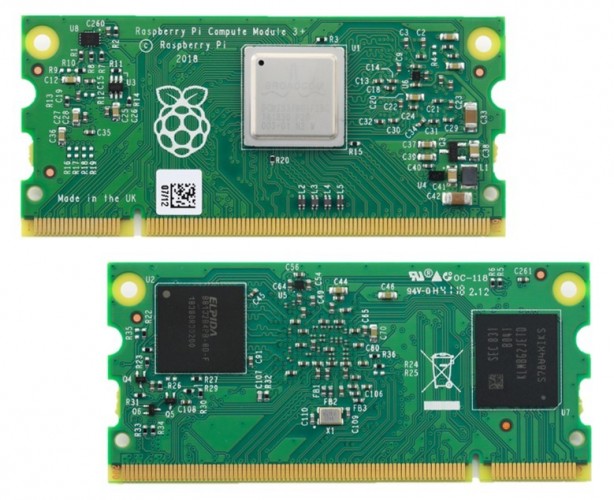 Premier Farnell has started shipping the latest version of the Raspberry Pi, the Compute Module 3+.

The Raspberry Pi has been very popular in embedded designs and the Module 3+ delivers the enhanced thermal performance and ease of use of Raspberry Pi 3 Model B+ in a smaller form factor, with a choice of memory variants suitable for a broad range of embedded applications including IoT devices and industrial automation, monitoring and control systems.

The Compute Module 3+ is based on the Broadcom BCM2837B0 64-bit application processor running at 1.2GHz, with 1GB LPDDR2 SDRAM. Developers can now choose between 8GB, 16GB & 32GB eMMC flash variants and a ‘Lite’ variant, with no eMMC flash, to match their storage requirements.

“Customers continue to tell us that it is the ease of use of the Raspberry Pi that makes it so attractive to them when choosing a development board. Over a third of our Raspberry Pi customers are using the board for professional use.” says Hari Kalyanaraman, Global Head of SBC and Emerging Business at Premier Farnell.

“This new version of the popular Raspberry Pi Compute Module delivers on ease of use, as well as providing enhanced thermal performance and increased flexibility through multiple memory variants. Developers no longer need to customise their board if they need additional memory, and can get their products to market faster than ever before.”

Raspberry Pi Compute Module 3+ will remain in production until at least January 2024 which is a key consideration for embedded and industrial designs.