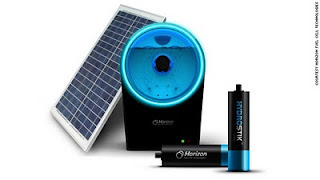 
“We no longer need to rely on nationwide networks of hydrogen fueling stations to enable largescale fuel cell commercialization,” said Taras Wankewycz, chief marketing officer and one of the company’s founders. “Horizon is initiating a transition that places consumers in the driving seat. Thanks to our innovation each household can gradually become a major part of tomorrow’s hydrogen fuel supply infrastructure.


Despite the high aims, the system seems practical. A desktop device called Hydrofill simply plugs into the mains power, a solar panel or a small wind turbine, automatically extracts hydrogen from its water tank and stores it in a solid form in small refillable cartridges. The cartridges contain metallic alloys that absorb hydrogen into their crystalline structure, and release it back at low pressures, removing concerns about storing hydrogen at high pressure. This storage method also creates the highest volumetric energy density of any form of hydrogen storage, even higher than liquid hydrogen. Unlike conventional batteries, these cartridges carry more energy capacity, are cheaper, and do not contain any environmentally-harmful heavy metals.
The key issue now is cost and the scalability of the technology for consumer markets. Horizon already makes a hydrogen generator for the laboratory at $848, so the consumer version should be considerably cheaper.
Horizon believes the HYDROFILL is the first step towards private refueling of new generations of fuel cell electric vehicles. Fuel cell technology can greatly improve the features and usability of many battery or engine-powered devices, and create the possibility for lower cost electric cars that drive longer distances and recharge instantly.
Instead of starting with more complex automotive developments, Horizon’s founders decided to start enabling devices that require less power, such as various portable and consumer applications. In 2006 and as a way to start nursing society through the infancy of the hydrogen economy, Horizon introduced solar hydrogen powered toy cars that quickly became the world’s largest volume-produced commercial fuel cell products. Today the company sells its fuel cells through various retail channels in over 60 countries, reduced the cost of fuel cells to marketable levels, and has developed practical ways for all to store and refuel hydrogen.
Horizon’s next phase starts now with the market introduction of a complete line of portable consumer electronic devices that address much larger markets. The first of these products include a micro-fuel cell power supply called MINIPAK, which extends the off-grid runtimes of small electronic devices including cell phones, lighting products, and many USB powered devices.
Horizon will also present an upgraded version of its larger portable off-grid DC power supply system called HYDROPAK. While these and other products will start entering the market in 2010, Horizon is already developing larger-size refueling systems that will enable anything from garden equipment to transportation.