Mbed has run its second annual Developer Survey, giving it the ability to compare data to the year before: which technology is gaining in popularity, how many developers have started production and which market segments are trending, says Jan Jongboom,Developer Evangelist IoT at mbed sponsor Arm.
This year’s survey had over 2,300 respondents, highlighting the role of embedded developers across the whole stack, and the challenges they face.
Embedded development is a tough skill to master: from quirky peripherals to manual memory management, trying to squeeze the last bit of performance out of a microcontroller and saving another 20 cents in the bill of materials (BOM) requires experience. 60% of Mbed developers have over 10 years of experience, and almost half the respondents are over 46.
The full-stack embedded developer seems to be upcoming, with 30% of developers indicating that they can do both sides of an IoT product: both embedded and web.

Japan has always been one of the strongest markets for Mbed, but it also sees many developers from the US, UK, Germany, France and India. It's also interesting to see that the results are well balanced between Asia, Europe and North America. However the survey results are skewed toward English speaking countries, probably because the survey was in English.

What are they using?
2018 saw a big increase of supported modules in Mbed. Modules drastically shorten the time to market, reduce cost in smaller production runs and can save time by having precertified RF. This trend shows up in survey with 40% of developers incorporating a module in their design.

The Arm Mbed Online Compiler is what draws most people into Mbed, but after initial prototyping, most professional developers move their project to their favorite IDE. Keil uVision is the most used IDE among developers, but the high use of GCC over commercial compilers stands out. J-Link is used more than ULINKpro, but Mbed's own open-source SWDAP debugging probe is increasing in popularity.

Connectivity types
Embedded news is all about IoT, but about 30% of embedded devices still have no connectivity method. That number has increased from 29% to 33%, though it's difficult to draw conclusions.

For the devices that use connectivity, mbed sees a very sharp rise of LoRa, now twice as big as the cellular LPWAN methods (Cat-M1 and NB-IoT) combined. Mbed always has had a big foothold in the LoRa community, and it has added a LoRaWAN stack to Mbed OS.

68% of respondents also indicated that security has become more important.

End markets and going to production
There weren’t a lot of changes in the end markets for which people develop. The industrial and smart home markets remain very strong, the wearables market is slowly dropping and the smart cities market is on the rise. There is a correlation between the growth of LPWANs and smart cities, so if the growth of LoRa, NB-IoT and CAT-M1 continues, it will be interesting to see whether smart cities adoption accelerates, as well.

Of course, the only way for IoT devices to affect these end markets is for the device to make it to the market. 16% of users said that they’re currently shipping products, and 24% of respondents expect the product they're working on to go to production. Of the devices in production, respondents identified 'software development and debug problems' as the biggest issue during development. That’s probably not too surprising given that it's mostly developers responding to the survey. 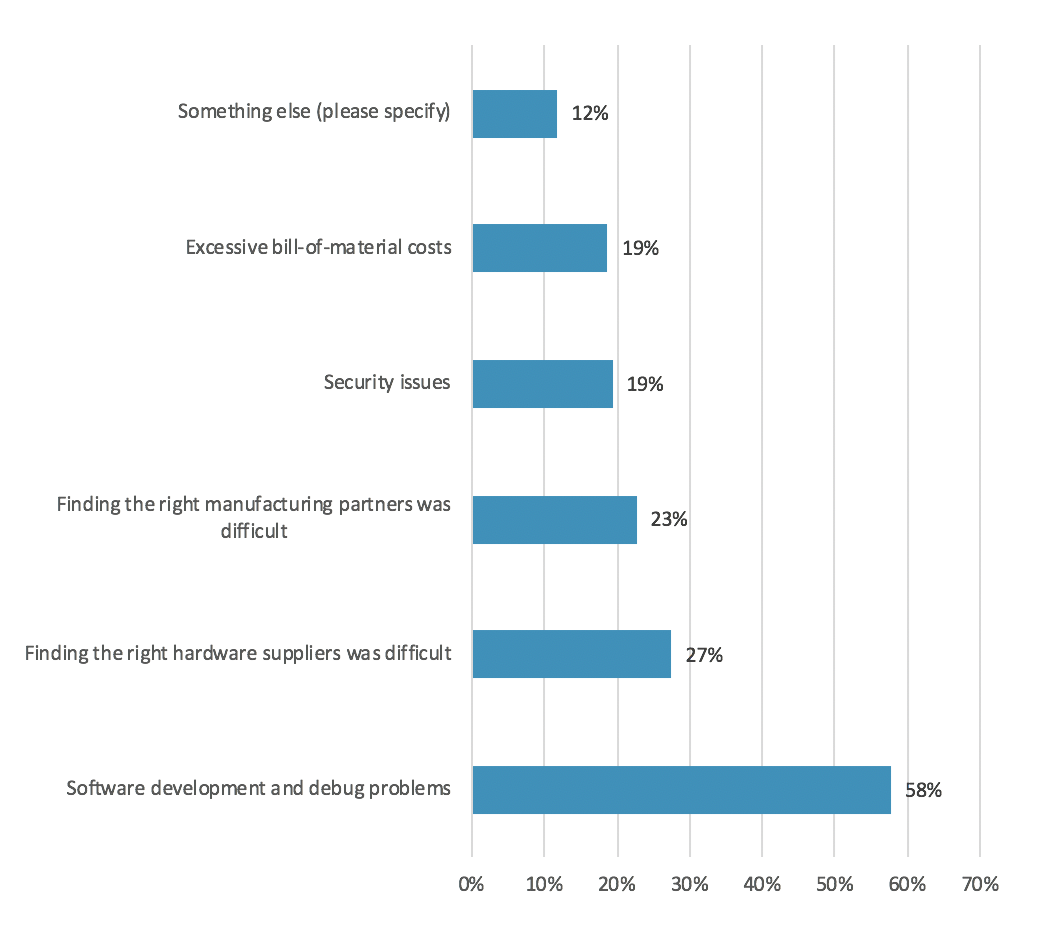 Mbed OS 5 has now been on the market for almost two years, the past year has seen a resilient file system, better networking stacks, bootloader support and new, low power APIs.

One negative point was the low score for documentation, and mbed says it will be working hard to improve the docs with new porting guides and architecture references as well as a general cleanup of old documentation.
Related stories: