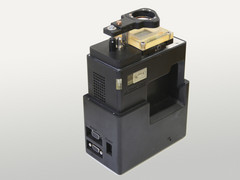 A research project at the Vienna University of Technology (TU Vienna) is aiming to could turn futuristic 3D-printers into affordable everyday items.
Printers which can produce three-dimensional objects have been available for years but the project has developed a much smaller, lighter and cheaper version that could be mass produced to brign down the cost. This would allow anyone to produce small, taylor-made 3D-objects at home, using building plans from the internet – and this could save money for expensive custom-built spare parts.

Several scientific fields have to come together to design the 3D-printer. The device was assembled by mechanical engineers in the research group of professor Jürgen Stampfl, but also the chemical research by the team of professor Robert Liska was of crucial importance: first, chemists have to determine which special kinds of synthetic material can be used for printing.
The basic principle of the 3D-printer is quite simple: The desired object is printed in a small tub filled with synthetic resin. The resin has a very special property: It hardens precisely where it is illuminated with intense beams of light. Layer for layer, the synthetic resin is irradiated at exactly the right spots and as one layer hardens, the next layer can be attached to it, until the object is completed in a process called 'additive manufacturing technology'.
“This way, we can even produce complicated geometrical objects with an intricate inner structure, which could never be made using casting techniques,” said Klaus Stadlmann who developed the prototype together with Markus Hatzenbichler.


This method is not designed for large-scale production of bulk articles – for that, there are cheaper alternatives. The great advantage of additive manufacturing is the fact that is offers the possibility to produce bespoke individually adjusted items. The prototype of the printer is no bigger than a carton of milk, it weighs 1.5 kilograms, and at just 1200 Euros, it was remarkably cheap. “We will continue to reduce the size of the printer, and the price will definitely decrease too, if it is produced in large quantities”, Klaus Stadlmann believes.

LED for Higher Resolution
The individual layers hardened by the light beams are just a twentieth of a millimetre thick. Therefore, the printer can be used for applications which require extraordinary precision – such as construction parts for hearing aids. Unlike previous models, the printer at TU Vienna uses light emitting diodes (LEDs), with which high intensities of light can be obtained at very well-defined positions.
The research group for additive manufacturing technologies at TU Vienna is working with a variety of different 3D-techniques and materials. New materials – such as special ceramics or polymers – are constantly being developed for 3D-printing. 3D objects can now even be made from eco-friendly biodegradable substances. In cooperation with biologists and physicians, the scientists could show that the artificial structures created with their 3D-printer technology are perfectly suited to serve as a scaffold that supports natural growth of bone structure in the body.


Versatility
No matter whether it is medical parts, adjusted exactly to the patient’s needs, special spare parts which otherwise would have to be shipped around half the globe, or whether it is just some kind of self-designed bling jewellery: with the versatile and cheap devices and materials developed in Vienna, highly complex 3D objects can now be built from a variety of materials with very different mechanical, optical and thermal properties.