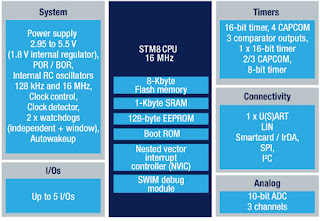 Despite the ambitions of 32bit microcontroller makers to push 8bit versions out of the market, STMicroelectronics has continued to drive the price down with a new 8pin package option.

The 32bit devices based around the ARM Cortex M0+ (NXP/Qualcomm) and MIPS cores (Microchip has both) have struggled to move down from 65 cents to much below 50 cents, instead adding additional peripherals.

The $0.20 STM8S001 in an SO-8 package includes I2C, UART, and SPI interfaces, unusual for an 8bit, pin limited device. Alongside the 8bit 16MHz core It includes 8KB Flash memory, 1KB RAM, 128-byte EEPROM, and a 3-channel 10-bit analogue to digital converter (ADC), and is lower cost than the popular STM8S003 for a similar specification.

In larger package options (and higher cost), the STM8S001 also supports five general purpose IOs (GPIOs), one 8-bit and two 16-bit timers, and an internal RC oscillator that allows flexible clock control from 128kHz to 16MHz. There is also a Single-Wire Interface Module (SWIM) for programming and debugging.

The controller is fully specified from -40°C to 125°C for industrial devices like smart sensors and lighting controls, as well as consumer products such as toys, small appliances, personal electronics, PC peripherals, battery chargers, and many others.

The STM8S001 in 8-pin SO-8 is in production now, priced from $0.20 for orders of 1000 pieces, so that will be lower in higher volumes. A Discovery kit for evaluation and prototyping will be available in Q4 2017.
www.st.com/stm8svl