Enables the deployment of hybrid sensor networks that use both ZigBee and Bluetooth protocols. 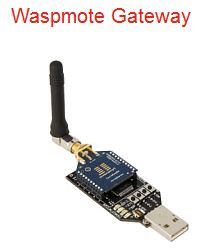 Libelium in Spain has developed a new Bluetooth module for its Waspmote wireless sensor network (WSN) platform that enables wireless sensor networks to be directly linked to portable devices such as smart phones, PDAs and laptop computers. This is particularly useful for medical applications and for industrial diagnostics and when combined with the Meshlium multi-protocol router, it supports the deployment of hybrid ZigBee- and Bluetooth-based wireless sensor networks.
The new Bluetooth module extends the Waspmote platform by offering a new choice for radio communication. The platform is extremely modular allowing the use of a wide range of modules for both wireless communication and sensors. Now WSN users can choose between a Bluetooth module and a range of ZigBee modules covering the main frequency bands (2.4GHz, 868MHz, 900MHz). Libelium CTO David Gascón says, “This module will be particularly useful for medical applications requiring the integration of biometric sensors and for sending sensor information to Bluetooth-equipped industrial systems”. He adds, “Users with existing Bluetooth-based infrastructure will be able to extend it to include Waspmote and its range of sensors”.
The new module exploits key features of the platform such as power management. The Waspmote internal microprocessor minimises energy consumption by switching the radio module on and off at the necessary intervals. The new module is able to send sensor data frames to smart phones that support Serial Port Profile. Security mode is implemented with PIN validation which can be preconfigured such as a “Network Key” and it allows the management of a Trusted Nodes list in order to create secured networks.
Waspmote users are also now able to build hybrid networks with both Bluetooth and ZigBee sub-networks if they use the Libelium Meshlium multi-protocol router to bridge between the sub-networks. With both Bluetooth and ZigBee using the 2.4GHz industrial, scientific and medical (ISM) radio band there is the possibility of interference. For this reason Waspmote enables Bluetooth and ZigBee communication to work in the same environment by using Adaptive Frequency Hopping (AFH) which enables the Bluetooth radio to dynamically identify channels already in use and to avoid them.
Users are able to flexibly change a device between ZigBee and Bluetooth as all the modules use the same kind of socket on the Waspmote board. The platform has an open source API and programming environment; new libraries are available to support the Bluetooth module. David Gascón says “Waspmote’s architecture means that each additional module adds value to the platform”. Complete documentation and code examples can be found at http://www.libelium.com/waspmote.