A digital instrument for the 21st century

What would an instrument designed for digital music look like? That question has been bothering Japanese media artist Toshio Iwai since 1985, and his vision has finally come true with the worldwide launch in the UK of Tenori-On.
This is a 16 x 16 grid of buttons lit by white LEDs that produces a range of 253 synthesized 'voices', half from Yamaha's existing synthesisers and half specially developed for the system. The basic array plots pitch vs time, but there are 16 layers for different, complex ways to manipulate sounds and the array also displays the notes as they play. One of these includes the ability to rotate the notes while maintaining their relationship in time (see videos below for more examples).

"In the digital age the problem of developing a musical instrument is one of developing a unique shape like a piano or saxophone has a unique shape," said Iwai. "The problem is that in the digital world everything is inside a black box and you can't get the physical feeling from that digital world. The new musical instrument for the 21st century has to have a relationship between shape, sound and interface and these have to match beautifully."
He has been working with Yamaha to turn it into a product for the last four years. Th £599 instrument is only available in the UK as the test market through 8 record shops, including Rooted Records in Bristol, as well as being sampled by South West music guru Peter Gabriel. 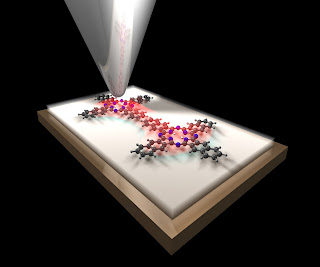