Octavo Systems has launched its first System-in-Package (SiP) product based on the new STM32MP1 embedded Linux microprocessor from STMicroelectronics.

The OSD32MP1 allows users of the popular STM32 family to move to Linux without adding size or complexity to their design. Octavo has tightly integrated system building blocks to develop a device that is up to 64% smaller than an equivalent system made from discrete components. At only 18mm X 18mm the OSD32MP1 is the same size as the STM32MP1 but integrates: 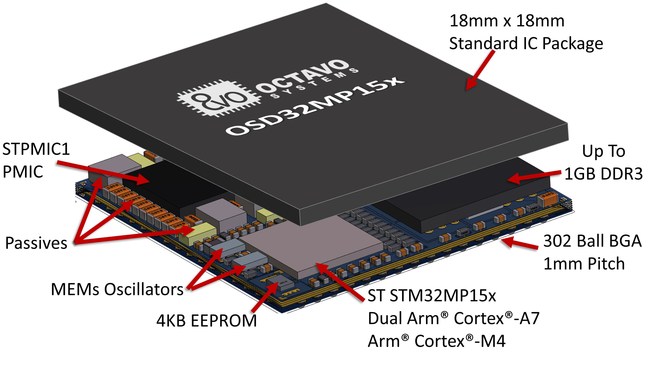 The OSD32MP1 integrates the STM32MP1, DDR, PMIC, EEPROM, Oscillators, and Passives into a single BGA package that is 18mm X 18mm. At only 18mm on a side, the OSD32MP1 packs an entire STM32MP1 system in a package the same size as the processor itself saving designers up to 64% in PCB area.

The SIP integration allows users to take advantage of a full microprocessor without the increase in complexity that typically comes from routing DDR and complex power management. The ability to reuse firmware and the elimination of complexity makes the OSD32MP1 the easiest path for designers to move from a microcontroller to Linux.

"The continued push of IoT and the demand for more data has required many applications to migrate from an existing microcontroller design to one based on a microprocessor running Linux. There are usually two major hurdles that prevent this from being an easy transition; porting their application, and complicated hardware designs," said Greg Sheridan, Marketing Manager at Octavo Systems. "Integrating the new STM32MP1 into the OSD32MP1 removes these roadblocks, greatly reducing the effort required to migrate from a microcontroller to a microprocessor running Linux."

Beyond simplifying the design process, the OSD32MP1 reduces the cost of PCBs by needing less pace and less complicated manufacturing processes, like Laser Vias or Via-in-Pad. The OSD32MP1 also simplifies the task of sourcing components by integrating over 100 devices from multiple vendors into a single component.

"Having ST ask us to be one of their partners at launch really validates our vision for the future of electronics design. Designers will demand more integrated solutions to start to develop their unique applications faster rather than spend time on tedious tasks that don't differentiate their product," adds Gene Frantz, CTO Octavo Systems. "System-in-Package is the solution to provide this tremendous level of integration."

Design resources for the OSD32MP1 are available today on the Octavo Systems website. Samples will be available in Q3 with full production scheduled for Q4. "Pricing is still being finalized and will be in-line with the cost of an equivalent system designed with discrete components," said Greg.