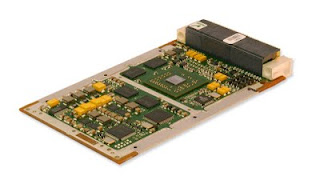 GE Fanuc Intelligent Platforms, part of GE Enterprise Solutions, has developed a rugged processing board with the performance of a supercomputer.
The OpenVPX-compatible GRA111 high performance graphics board is one of the first commercially-available products to feature Nvidia’s newly-announced GT 240 GPU (graphics processing unit) and is also the first rugged implementation of a GPU using Nvidia's CUDA (Compute Unified, Device Architecture). The board is the first result of a relationship with Nvidia announced on October 8th.
The GRA111 is the first member of GE Fanuc’s planned family of CUDA-enabled products that are expected to revolutionize military and aerospace embedded computing by bringing a supercomputing capability to applications and environments that require leading edge processing such as radar, signals intelligence and video surveillance and interpretation. For example, radar systems can run up to 15 times faster.

“The enormous potential of the GPGPU – the general purpose graphics processing unit – with its massively parallel computing architecture is just beginning to become apparent to developers in the military and aerospace field,” said Rob McKeel, Vice President, Embedded Systems at GE Fanuc Intelligent Platforms. “What we are announcing today is an exciting first: a new compact, lightweight platform that can deliver exceptional levels of computing performance in demanding applications and challenging environments.”

NVIDIA’s CUDA is a general purpose parallel computing architecture that takes advantage of the parallel compute engine in NVIDIA GPUs to solve many computational problems in a fraction of the time required on a general purpose CPU. It includes the CUDA Instruction Set Architecture (ISA) and the parallel compute engine of the GPU.
CUDA has been shown to deliver a 100x increase in speed in a broad range of applications that lend themselves to parallel computing. Early tests at GE Fanuc have shown that military applications can benefit from similar increases in speed. A major prime contractor in the military/aerospace industry has evaluated the CUDA architecture in a radar system, and found that performance improvement of 15x is achievable with minimal reprogramming effort.
The 3U format GRA111 derives much of its performance from the 96 cores, 128-bit memory interface, 1 GByte of DDR3 video memory, 16-lane PCI Express Gen 2 interface, 540MHz graphics clock and 1.3GHz processor clock of the GPU.
Optionally available as an LRM (Line Replaceable Module) in accordance with the VPX-REDI (VITA 48) standard and with a rich set of I/O, the GRA111 can also be applied to many of the most common graphics and video applications. Dual, independent channels mean that it is capable of driving RGB analog component video, digital DVI 1.0, and HDMI standards. In addition, the GRA111’s video input capability allows integration of sensor data using RS170, NTSC or PAL video formats.
Posted by Nick Flaherty