In a move that has crept under the radar (!) the UK regulator Ofcom has opened up the 60GHz band for unlicensed operation.
It is to open the spectrum in the 59 – 64 GHz band for Fixed Wireless Systems (FWS) and to combine this with the existing 57 – 59 GHz band under one overall licence exempt authorisation approach for FWS. This creates one contiguous and flexible block of spectrum providing 6.8 GHz of available bandwidth (57.1 – 63.9 GHz) taking into account two 100 MHz guard bands.
The large bandwidth available makes the new 57.1 – 63.9 GHz band (the “60 GHz band”) suitable for very high capacity, short hop FWS (e.g. 100MBit/s ~ 1GBit/s Ethernet systems). In addition the technical conditions that will be implemented along with the high propagation attenuation around 60 GHz will allow sharing between a wide range of applications (e.g. FWS, ITS, Wireless HD and others).
The various technical characteristics of the systems to be deployed, along with the high gaseous absorption propagation attenuation around 60GHz (see chart) implies that sharing should be possible between the various applications (Fixed, ITS, wireless HD & other) with a very low probability of interference.
Ofcom has also decided to incorporate a minimum antenna gain of 30 dBi into the technical conditions to
ensure that narrow beam antennas are employed. This decision will also bring the technical conditions into line with the new ECC recommendation ECC/REC/ (09)01 that replaces ERC/REC/12-09.
Specification: 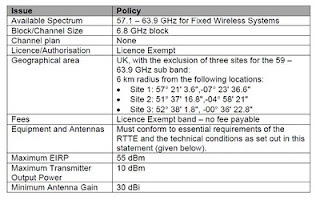 The publication of the Final Regulatory Statement on licence exemption and exemption regulations come into force in the summer of 2010.