Following on from the well established I2C interface standard, I3C is about to hit the embedded market.

The standard, developed by the MIPI consortium and now extending out to the wider market, combines I2C, UART and SPI into a 10Mbit/s, low power specification for designers with new features such as support for interrupts, hot swapping and multiple sensors.

However, it will take a little bit of time for the 2000 gates in the IP to be designed into devices, so it will be backwards compatible with 'most types' of I2C device and, importantly, the new devices will work on existing I2C busses. 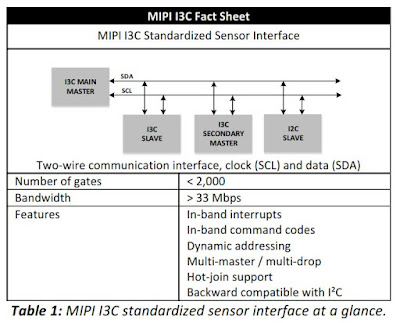 The new approach makes it easier for both device manufacturers and software developers to add more sensors to devices and combine multiple sensors from different vendors in products while reducing component and implementation costs. The specification also improves performance and power efficiency and provides sensor management capabilities not previously available.

“MIPI I3C was developed with tremendous collaboration and dedication from companies across the mobile, sensor and other industries who share common goals for innovation,” said Ken Foust, chair of the MIPI Alliance Sensor Working Group. “The contributions of so many stakeholders underscore the interest, need and demand in the marketplace for a new solution.”

Like I2C, it uses a 2-wire interface (compared to the 4-wire SPI), which drastically reduces pin count and signal paths and facilitates incorporation of more sensors in a device. MIPI I3C can also be used as a sideband interface to other high-speed interfaces, a function previously provided by I2C and SPI, to further reduce pin count.

The new standard provides synchronous and asynchronous time stamping to improve the accuracy of applications that use signals from various sensors over time. The time control improves the coordination of individual sensors, such as gyros and accelerometers, enabling them to work better together while substantially decreasing the energy required to operate the various devices.

This means sensors can work in an always-on manner, even if other components in a device are asleep, while operating at very low power to minimize impact on battery life. It enables always-on sensors to accumulate (batch) data and transmit it quickly, when needed, to minimize energy consumption.