Infineon is supplying a 60GHz radar system for gesture detection in the next generation Pixel 4 smartphone being developed by Google. 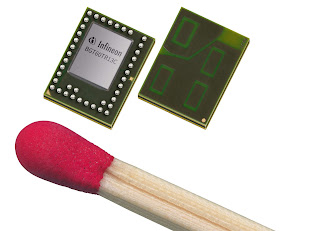 An integrated antenna system in the XENSIV BGT60TR13C package allows sensing of the presence and movement of people and objects with high precision or measures distances and speeds. This chip is the base for Google’s Soli technology and has now been integrated for the first time into a smartphone for gesture control.

"With our radar technology devices become 'context-aware’. This means that they can finally understand their environment and react much more purposefully," says Andreas Urschitz, Division President for Power Management and Multimarket at Infineon Technologies. "The precise motion detection by the 60 GHz radar chip turns the Google Pixel 4 smartphone into a gesture control system. This is a revolution in the human-machine-interaction. At Infineon, we are furthermore working on the fusion of multiple sensors to simplify interaction and increase the usefulness of the devices."

Infineon’s radar technology has its roots in the automotive sector. Radar sensors have been effectively measuring distances, speeds and movements while driving for decades. Infineon has further developed these functions for small devices. The 60 GHz chip is a complete radar system with antennas on a very small area (5 x 6.5 mm) coupled with low power consumption. The BGT60 family has a transmit current of 480mA at 3.3V, giving a power consumption in use of 1.5W, which is high for a smartphone but the previous devices were aimed at tethered applications such as smart speakers with a sensing distance from 20cm to 5m. However the overall power usage of the sensor will depend on the software controlling the duty cycle, or how often it is used, as it is only likely to be used in infrequent short bursts. This version will be optimised for shorter distances from 1cm to 1m, which will reduce the power consumption by potentially by a factor of 5. Further circuit optimisations will reduce that further, and we’ll publish the figures when we get them.

The radar sensor can perceive movements in rooms or measure distances from objects in the millimetre range with utmost precision. With the appropriate software, the motion data is converted into functions, so that control via gestures is possible without touching the device.

The fusion of multiple sensors in a single device creates new solutions that measure and improve air quality or intelligently control burglary protection, for example. In addition to voice-controlled assistants, 'intelligent' household appliances or wearables, buildings, so-called smart buildings in particular, are becoming more interactive. Sensors detect the number of people in the rooms or can adjust the need for light sources to improve safety and energy efficiency.
www.infineon.com