Solid state drives (SSDs) and the underlying NAND flash technology have seen a huge swing in shipments over the last six months.


Following a plunge during the first three months of the year, global SSD shipments snapped back to growth in the second quarter, as demand from the client system market boosted the performance of third-party suppliers like Kingston, says the latest report from IHS Markit | Technology.

The client SSD segment, which includes devices like mobile and desktop PCs, was the main driver of the rebound, Client SSD shipments increased by 11.9 percent sequentially in the second quarter. In contrast, the enterprise SSD market saw sequential growth of only 1.9 percent.

This surge in the client segment disproportionately benefitted third-party players that don’t manufacture the NAND flash memory microchips used within their products, despite chip maker Samsung being teh largest SSD supplier by far (see chart).

Kingston exemplified this third party trend, with shipments rising by 23.3 percent sequentially in the second quarter. This propelled Kingston to the No. 3 rank in SSD unit market for the first time in three years, after placing fifth in 2017 and 2018 and fourth in 2016. The company saw six consecutive quarters of double-digit revenue growth.

“Third-party players like Kingston are outperforming the overall market because NAND components are available at such low prices compared to a year ago,” Zhao said. “These companies are able to take advantage of these lower costs and gain market share rapidly.”

Intel captured the No. 2 position in SSD revenue share in the second quarter 2019. Because Intel focuses more on the enterprise market, its SSD ASP is far above average. Intel shipped more than 4 million SSDs in the quarter, up 17.5 percent compared with the previous quarter. 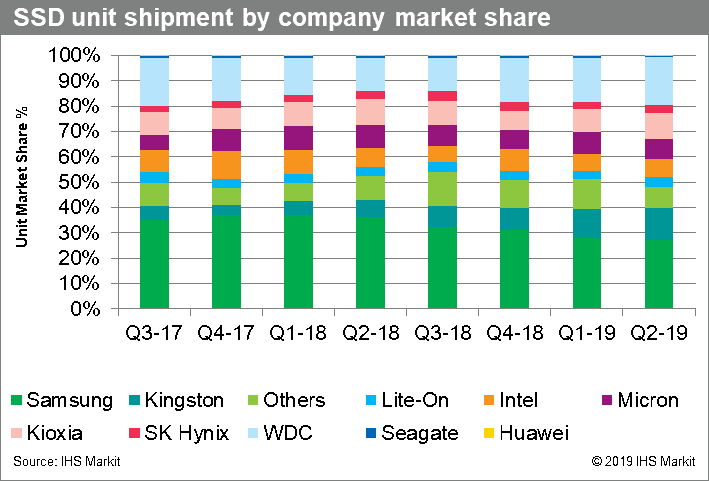