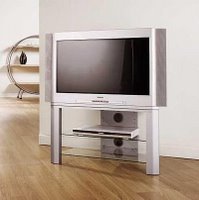 Chinese TV maker TCL, which took over Thomson's TV and DVD business three years ago and created TCL Thomson Electronics (TTE) as one of the largest consumer electronics companies on the globe, is re-structuring and pulling out of the Thomson brand, but not for another two years!
The company, which is still focussed on CRT TVs rather than flat panel, 'is planning a new business model'. Whatever that is, it will still guarantee manufacturing at Thomson's Angers factory until the end of 2008.
This might be an admission that it cannot compete in Europe (although I suspect it has discovered the weakness of the Thomson consumer brand in Europe), it is more likely to be a move into LCD TVs manufactured in China rather than here. After all, it expects sales volume of flat-panel TVs to overtake CRT and reach 22.6 million units in 2010 in China, said Li Dongsheng, chairman and president of TCL to Digitimes.
Demand for flat-panel TVs in China is expected to total 9.5 million units in 2007, up from 4.6 million this year. As a result, China will overtake Japan and become the third largest flat-panel TV market next year, Li said. In China, LCD TV sales volume will reach five times the amount of PDP TVs, Li estimates.
Posted by Nick Flaherty