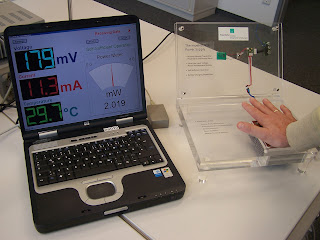 Researchers at the Fraunhofer Institute for Integrated Circuits IIS in Erlangen, Germany, have developed a way of harnessing natural body heat to generate electricity to power low voltage logic devices.

While this won't power a cell phone, medical sensors may be able to function without power from a wall socket. Instead, they will draw all the power they need from the warmth of the human body. The respective data will be sent by a radio signal to the central monitoring station.

The researchers, with collleagues at the Fraunhofer Institute for Physical Measurement Techniques IPM and the Fraunhofer Institute for Manufacturing Engineering and Applied Materials Research IFAM, are using thermoelectric generators, TEG for short, made from semiconductor elements that extract electrical energy simply from the temperature difference between a hot and a cold environment. Normally, a difference of several tens of degrees would be required in order to generate enough power, but the differences between the body’s surface temperature and that of its environment are only a few degrees.

“Only low voltages can be produced from differences like these,” said Peter Spies, manager of this sub-project at the IIS. A conventional TEG delivers roughly 200 millivolts, but electronic devices require at least one or two volts. “We combined a number of components in a completely new way to create circuits that can operate on 200 millivolts,” says Spies. “This has enabled us to build entire electronic systems that do not require an internal battery, but draw their energy from body heat alone.”
Posted by Nick Flaherty