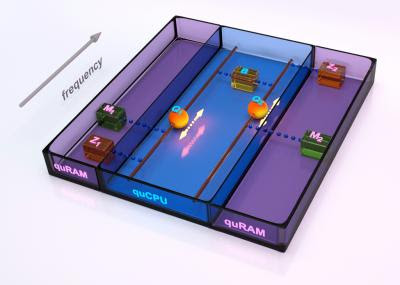 Researchers in the US have have demonstrated a quantum integrated circuit that implements the quantum von Neumann architecture, the heart of practical computing. In this architecture, a long-lived quantum random access memory can be programmed using a quantum central processing unit, all constructed on a single chip, providing the key components for a quantum version of a classical computer.
The hardware, developed at the University of California at Santa Barbara, is based on superconducting quantum circuits, and must be cooled to very low temperatures to display quantum behaviour. The architecture represents a new paradigm in quantum information processing, and shows that quantum large-scale-integration is within reach.

The quantum integrated circuit includes two quantum bits (qubits), a quantum communication bus, two bits of quantum memory, and a resetting register comprising a simple quantum computer. "Computational steps take a few billionths of a second, comparable to a classical computer, but the great power is that a quantum computer can perform a large number of calculations simultaneously," said Matteo Mariantoni, postdoctoral fellow in the Department of Physics. "In our new UCSB architecture we have explored the possibility of writing quantum information to memory, while simultaneously performing other quantum calculations.
"On the quantum von Neumann architecture, we were able to run the quantum Fourier transform and a three-qubit Toffoli gate –– key quantum logic circuits for the further development of quantum computing," said Mariantoni.