Atmel has launched what it says is the world’s highest performing, low power, 8-bit MCUs with 1kB Flash memory.

The new ATtiny102/104 MCUs runs up to 12MIPS and integrate features previously only available in larger more expensive MCUs, aiming at smaller applications including logic replacement and the latest cost-optimised applications in the consumer, industrial and home automation markets.

The move appears to be an attempt to protect the AVR product line with the impending acquisition by Microchip. Microchip's PIC range of 8bit microcontrollers is also popular in the the same markets and it is distinctly possible that the AVR range will become a victim of the merging of the product lines. A spokesperson for Atmel declined to comment on the future of the line as the acquisition has not been completed.

The majority of today’s 8-bit market growth is coming from applications that previously only required discrete components. With many of these new applications requiring simple intelligent functions including timing, motor control or on/off functionality, 8-bit MCUs are becoming an essential feature for the personal healthcare, small kitchen appliance and consumer markets, says Atmel. 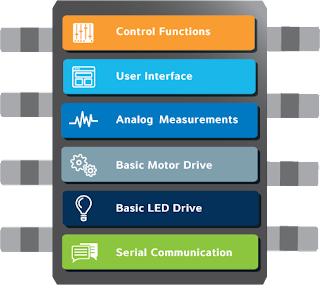 “Atmel has already sold more units of its 8-bit AVR core-based MCUs than the 7.4 billion people on Earth,” said Oyvind Strom, Sr. Director of MCUs at Atmel. “We continue to expand our AVR portfolio with the new ATtiny102/104 8-bit MCUs. These are the first two devices in our new tinyAVR portfolio that are packed with features optimized for tiny, compact MCU systems such as LED lighting, fan control and other small applications.”

To accelerate the design process, Atmel offers a low-cost Xplained Nano evaluation kit available for only $4.44 USD in the Atmel Store. The new kit includes a board with an ATtiny104, embedded programmer, access to all I/O, one push button and one LED. The ATtiny102/104 are supported by Atmel’s development ecosystem, including Atmel Studio 7, the integrated development environment (IDE) for developing and debugging both Cortex-M and AVR applications.

Engineering samples are available today with mass production samples scheduled for May 2016.