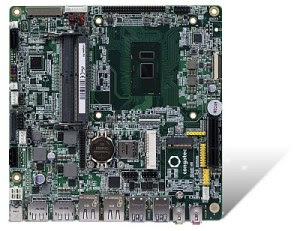 "Our new Thin Mini-ITX motherboards can be universally employed in all the various embedded and IoT applications as the new low-power versions of the high-end 64-bit Intel Core processors offer a highly configurable thermal design power (TDP) of 15W, with the flexibility to scale dissipation from 7.5W cTDP to 25W cTDP for an exceptional balance of power and performance," explains congatec Director Product Management Martin Danzer. Perfectly tailored for the embedded and rugged industrial market, the new flagship motherboard design offers at least 7 years long term availability as well as a comprehensive set of industrial interfaces and drivers. Thanks to congatec's personal integration support, the design-in phase is highly simplified and becomes an easy job for OEM engineers.
The board ships with four different dual-core variants of 7th Gen Intel Core U SoC processors and have a configurable cTDP power envelope from 7.5 W to 25 W. Two SO-DIMM sockets support up to 32GB DDR4-2133 memory.

An integrated Board Management Controller, HDA audio including a stereo amplifier, a MIPI CSI-2 interface for direct connection of low-cost CMOS cameras as well as optional TPM 2.0 round off the feature set. The boards support the 64-bit versions of Microsoft Windows 10 and Windows 10 IoT as well as all common Linux operating systems. A comprehensive choice of add-ons for easier design-in, including cooling solutions, I/O shields and cable sets, is also available.