Renesas has used a multicore architecture to combine real time network protocols and redundancy protocols in a single chip for the next generation of industrial systems.

So far there has been little development in unifying these two types of networks, which meant that when developing network devices, it was necessary to use components supporting one or another of the available protocols.

The R-IN Engine uses an ARM Cortex-M3 processor to provide both real-time processing of communication data and redundancy protocol operation. The R-IN Engine improves power consumption and throughput, reduces jitter, and has already been successfully implemented in existing products and will be further developed in future. The RZ/N Series supports on a single chip a variety of industrial network protocols and network redundancy protocols.

The RZ/N1D has dual ARM Cortex-A7 cores for applications such as network switches, PLCs, and gateways. The RZ/N1S uses a single A7 for nano-PLCs and operator terminals. The RZ/N1L is aimed at industrial equipment communication blocks or slave devices such as remote I/O units and enables system developers to develop devices that are more compact and low cost. 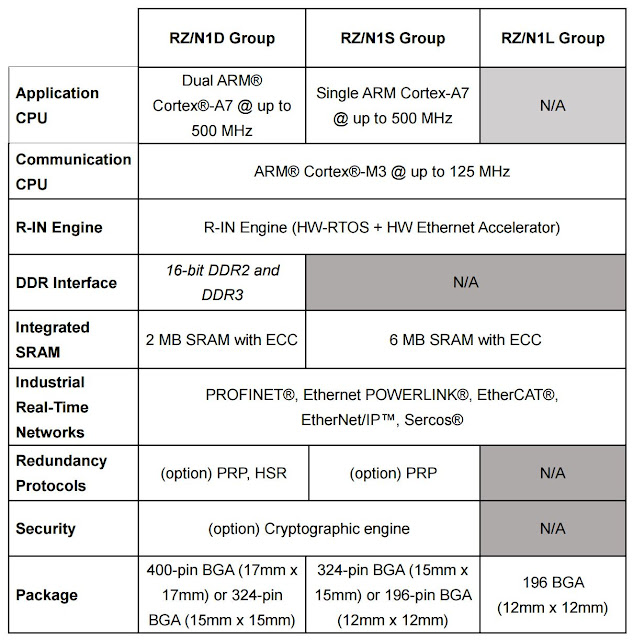 With the recent advancement of Industry 4.0 to implement network connections in factories for increased efficiency, there are growing demands for network devices with support for industrial network protocols enabling real-time processing, protocol gateway functionality, protected networking functionality, and support for network redundancy protocols to ensure highly reliable and efficient communication.

Renesas provides a Generic Abstraction layer API that will deliver unified support for a variety of industrial network protocols without performance tradeoffs. Using such API will enable system developers to combine supported protocols as needed with minimal impact on the application software, and to shorten the development time of industrial network devices by as much as 50 percent. System developers can also use compiler environments including IAR Embedded Workbench from IAR Systems and OS environments including Linux, VxWorks and ThreadX from Express Logic.
www.renesas.com