Intel McAfee security deal is all about the IoT this time

Intel buying McAfee in 2011 for $7.7bn was all about the enterprise. Now, Intel spinning out McAfee into a separate company in a $4.2bn deal that is all about the Internet of Things.
Back in 2011, Intel was aiming to secure the enterprise alongside its PC and server processors in a market where it dominated. Now it needs to secure the IoT, it needs cooperation from companies that license the ARM architecture. Hence the need for an independent venture.
The key change is the McAfee Data Exchange Layer (DXL), the industry-endorsed communication fabric providing real-time interaction between applications. This needs to be taken down the stack to the gateway, where Intel processors are being used, but further down to the node. This is the challenge. Another Intel company, Wind River, is already taking up that challenge, pushing the VxWorks real time operating system further into the IoT. 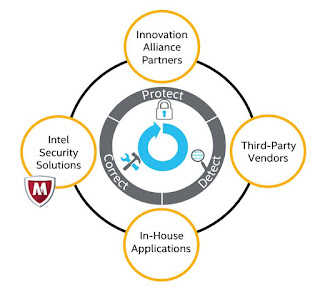 The McAfee Security Innovation Alliance has over 135 partners around the world, and 30 of these are using the DXL connection as an API.
The giveaway is in the new strapline for McAfee - innovation, trust, and collaboration. The new company is 49% owned by Intel, with the remainder from equity house TPG and private equity investment firm Thoma Bravo, bu tit has to demonstrate that it can work well with the rest of the industry that does not rely on Intel. Intel Senior Vice President and General Manager Chris Young will lead the new McAfee as Chief Executive Officer. TPG partner Bryan Taylor has been named Chairman of the Board.
“Cybersecurity is the greatest challenge of the connected age, weighing heavily on the minds of parents, executives and world leaders alike,” said Christopher Young, CEO of McAfee. “As a standalone company with a clear purpose, McAfee gains the agility to unite people, technology and organizations against our common adversaries and ensure our technology-driven future is safe.”
“We offer Chris Young and the McAfee team our full support as they establish themselves as one of the largest pure-play cybersecurity companies in the industry,” said Brian Krzanich, CEO of Intel. “Security remains important to Intel, and in addition to our equity position and ongoing collaboration with McAfee, Intel will continue to integrate industry-leading security and privacy capabilities in our products from the cloud to billions of smart, connected computing devices.”
The advantage of DXL is that it is an open standard. Unlike typical integrations, each application connects to the universal DXL communication fabric and there is just one integration process instead of multiple efforts, which makes it suitable for enterprise scale IoT deployments.
OpenDXL will support a broad range of languages, enabling developers to create integrations using their favourite development environment. One app publishes a message or calls a service; one or more apps consume the message or respond to the service request.
As is the goal for any standard, the interaction is independent of the underlying proprietary architecture of each integrating technology and integrations are much simpler because of this abstraction from vendor-specific APIs and requirements.
In addition to creating native DXL integrations, developers can also wrap their services to interact or wrap the API of a commercial product to publish data onto DXL. Other services can listen to DXL messages and calls to enrich their functionality with the latest data, or take appropriate action. For a more sophisticated app reflecting orchestration, these sorts of actions can be scripted together to drive a waterfall—or simultaneous set—of actions.


The challenge now is to persuade the wider embedded industry that the new McAfee is truly independent of Intel in order to use the technology.

Related stories on the Embedded Blog:
Posted by Nick Flaherty