Microchip has launched a System in Package (SiP) that combines an ultra-low power microcontroller with an 802.15.4 sub-GHz radio to provide multi-year battery life in a 5 x 5 mm package.

Rather than integrating RF and digital functions into a single chip Microchip has put two chips in a single package for the SAM R30 SiP. It uses the same protocol as Zigbee but in the 915 or 868MHz ISM bands, giving longer range and lower power consumption but with lower data rates,making it suitable for connected home, smart city and industrial applications in the Internet of Things (IoT).

The SiP is built using the SAM L21 MCU (acquired with Atmel) that is based on the Cortex M0+ architecture and features ultra-low power sleep modes, with wake from serial communication or General-Purpose Input/Output (GPIO) while consuming 500nA.

With the radio chip operating in the 769-935 MHz range, the SAM R30 SiP gives developers the flexibility to implement a point-to-point, star or mesh network. Microchip helps developers get started immediately with the free MiWi point-to-point/star network protocol stack. Mesh networking capabilities will be available later this year. Nodes outfitted with the SiP can be positioned as far as one kilometer apart, with the ability to double the range in a star topology. When used in a mesh network, the SAM R30 delivers reliable wide-area coverage for applications such as street lighting or wind and solar farms.

Developers can begin prototyping immediately with the ATSAMR30-XPRO development board, priced at $65. This USB-interfaced development board is supported by the easy-to-use Atmel Studio 7 Software Development Kit (SDK). 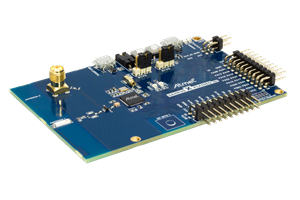 The SAM R30 SiP is available in 33pin and 48pin QFN packages to be sampled or purchased in volume production quantities.