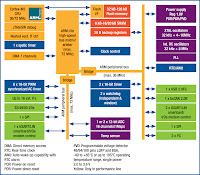 STMicroelectronics is pushing a new microcontroller based on the ARM Cortex-M3 core, the STM32 line, challenging start-up Luminary Micro which launched $1 parts last year.
The STM32F103 “Performance” line, with 72MHz clock frequency, or the STM32F101 “Access” line, with 36MHz clock frequency. Both lines offer from 32K to 128K of embedded Flash memory but differ in maximum SRAM size and peripheral combinations. At 72MHz, executing from Flash, the STM32 consumes only 36mA, which ST claims is the lowest power consumption in the 32bit market, corresponding to 0.5mA/MHz.
Luminary Micro were the first to launch an ARM Cortex microcontroller using the M3 core over a year ago, and now have 27 variants starting from $1, so there is tremendous price pressure in this market as ST's Access range starts at $1.80. Power figures for the Luminary parts are hard to come by as a lot of the figures are still pending, but from the data sheet the power is 115mW (Idd of 35mA at 3.3V for the LM3S101) or 5.75mW/MHz at 20MHz, which seems a substantial difference.
“Until now, 16bit and 32bit designers have often been faced with difficult choices, involving compromises between factors such as cost, power, and performance and whether to use industry-standard or proprietary platforms,” said Jim Nicholas, general manager of ST’s microcontroller division. “By eliminating the need to make these compromises, the STM32 will lead the obvious convergence of the 16bit and 32bit MCU markets.”
Peripherals on the ST parts include up to 128KB embedded Flash, up to 20KB of RAM, up to two ADCs (12-bit at 1 microsecond conversion time), up to three USARTs; up to two SPI (18MHz master/slave); up to two I2C; up to three 16-bit timers (4 input capture/4 output compare/4 PWM each) and a dedicated 6-PWM timer with embedded dead times for regulation and motor control vector drive applications, as well as USB, CAN, and seven DMA channels.
ST is pushing the low power applications such as medical glucose and cholesterol monitors as well as industrial PLCs, domestic appliances, domestic and industrial security, fire and HVAC systems, and consumer/PC applications such as card readers and biometrics.
Posted by Nick Flaherty