InVisage Technologies is using its near-infrared camera technology in a module for authenticating users in the home for the Internet of Things (IoT). 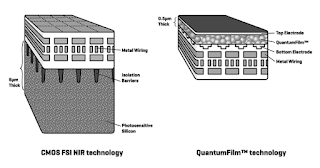 The Spark Authentication Module (SAM) near-infrared (NIR) camera module is powered by the previously announced SparkP2 2-megapixel NIR sensor (shown above). At just 8.0 by 8.0 by 3.1 mm, the SAM module is custom built for authentication systems such as Microsoft Windows Hello. In addition to blocking interference from direct sunlight, SAM enables authentication at a greater distance of beyond 100 centimeters from a tablet, laptop or phone so that users are not constrained to a small space in front of their device. Because it operates deeper into the near-infrared spectrum at the 940-nanometer wavelength, SAM also eliminates any intrusive red glow from LEDs.

SAM is the only system that can deliver 2K resolution in a tiny module while consuming 50 times less system power. Existing NIR cameras operate in conjunction with high wattage LEDs to overcome low CMOS sensitivity and ambient infrared in sunlight. The resulting high power consumption and heat generated by such bright LEDs has made outdoor performance a challenge for mobile face recognition systems that operate with lighter batteries. In contrast, SAM, powered by SparkP2, leverages low-power pulsed LEDs synchronized with an extremely short global shutter exposure, allowing for accurate imaging without battery drain. At 50 times lower power consumption, overall system temperature is also up to 20 degrees cooler.

“For authentication, mobile device makers demand compact modules that produce sharp images enabling smooth user verification with minimal false negatives or false positives, regardless of whether the user is indoors or out,” said Jess Lee, InVisage President and CEO. “It also needs to work within a reasonable range so that users can say ‘Hello’ without having to plant their eye or face just a few centimeters from the screen.”

With a photosensitive layer 10 times thinner than a typical silicon infrared sensor, the SparkP2 sensor powering SAM provides significantly higher quantum efficiency at 35% of infrared light at the 940-nanometer wavelength. This greater sensitivity results in sharper images and an expanded operational radius of beyond 100 centimeters, but it also enables minimal crosstalk in a thinner, 3.1mm module with a 72-degree field of view. Infrared cameras in particular suffer from blur due to high levels of crosstalk, or misdetection of light in nearby pixels. Crosstalk typically limits camera thinness by requiring a minimum distance between the lens and the photosensitive layer, but the SparkP2 lens in the SAM module can be much closer to the sensor without increasing crosstalk and preserving a higher level of sharpness.

SAM and SparkP2 are optimized for authentication systems that operate at 850 nanometers (with a visible red glow) and 940 nanometers (invisible with a tenfold improvement in sun irradiance rjection).
www.invisage.com.
Posted by Nick Flaherty