Shakeup in the top 20 semiconductor suppliers continues in 2016


Sales at the top 20 semiconductor companies declined by 6% in the first quarter of this year as the impact of consolidation and the downturn starts to bite.

The figures from IC Insights show that seven companies displayed a double-digit 1Q16/1Q15 decline and three that registered a dramatic 25% fall (with memory giants Micron and SK Hynix posting the worst results). Half of the top-20 companies had sales of at least $2.0 billion in 1Q16, so it takes $832 million in quarterly sales just to make it into the top 20 list. 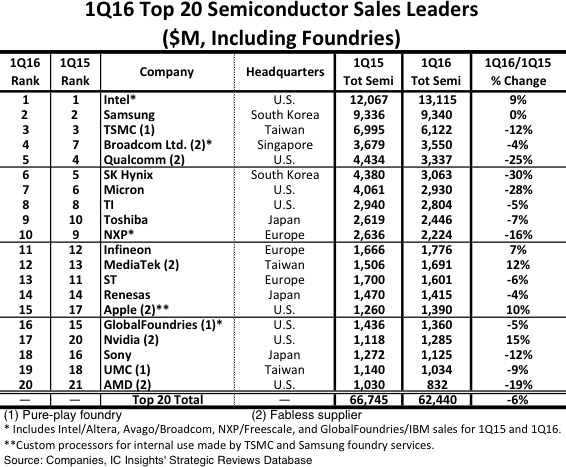 Apple is an anomaly in the top-20 ranking with regards to major semiconductor suppliers. The company designs and uses its processors only in its own products—there are no sales of the company’s MPUs to other system makers. Apple’s custom ARM-based SoC processors had a “sales value” of $1,390 million in 1Q16, up 10% from $1,260 million in 1Q15.

Apple’s MPUs have been used in 13 iPhone handset designs since 2007 and a dozen iPad tablet models since 2010 as well as in iPod portable media players, smartwatches, and Apple TV units. Apple’s custom processors—such as the 64-bit A9 used in iPhone 6s and 6s Plus handsets introduced in September 2015 and the new iPhone 6SE launched in March 2016—are made by pure-play foundry TSMC and IDM foundry Samsung.

There were some surprises though - despite the doom and gloom around the prospects for growth at Intel, the company still saw significant growth against the declining backdrop. Growth star MediaTek continued to advance, but Infineon also saw healthy growth. In terms of rankings, the biggest moves in the ranking were made by the new Broadcom (Avago/Broadcom) and Nvidia, each of which jumped up three positions in 1Q16 as compared to 1Q15.

There was one new entrant into the top-20 ranking in the first quarter US fabless supplier AMD. AMD had a particularly rough 1Q16 and saw its sales drop 19% year-over-year to $832 million, which was about half the $1,589 million in sales the company logged just over two years ago in 4Q13. Although AMD did not have a good 1Q16, Japan-based Sharp, the only company that fell from the top-20 ranking, faired even worse with its 1Q16/1Q15 sales plunging by 30%

In order to allow for more useful year-over-year comparisons, IC Insights combined the acquired/merged semiconductor company sales results for both 1Q15 and 1Q16, regardless of when the acquisition or merger occurred. For example, although Intel’s acquisition of Altera did not close until late December of 2015, Altera’s 1Q15 sales ($435 million) were added to Intel’s 1Q15 sales ($11,632 million) to come up with the $12,067 million shown in the chart aboe. The same method was used to calculate the 1Q15 sales for Broadcom (Avago/Broadcom), NXP (NXP/Freescale), and GlobalFoundries (GlobalFoundries/IBM).

As would be expected, given the possible acquisitions and mergers over this years such as Microchip/Atmel and ON Semiconductor/Fairchild, as well as any new ones that may develop, the top-20 semiconductor ranking is likely to undergo a significant amount of upheaval over the next few years as the semiconductor industry continues along its path to maturity.

IC Insights will have another update on the market later in the month.