Marking a distinct move into more professional use, STMicroelectronics has teamed up with Arduino to develop boards with a range of microcontrollers and sensors for IoT applications. 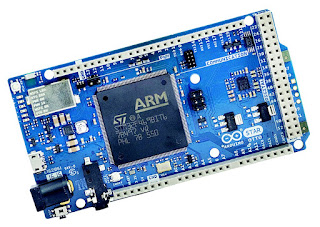 Arduino has been popular with hobbyists, but the first product of the STAR (ST and Arduino) program, the STM32F469-based STAR Otto baseboard, means IoT developers and other makers can build high-performance graphics into their smart devices using accessible hardware and software to improve their applications with easy-to-use touch displays and audio for command and control as well as for media-streaming.

The STM32F469 MCU is based around a 180MHz ARM Cortex-M4 core alongside ST’s Chrom-ART graphics accelerator and MIPI DSI display interface along with an open-source software graphics library. The board also provides a pre-integrated wireless link and audio capabilities, enabled by an ST MEMS microphone together with the necessary open-source drivers. This efficient and optimized approach lets makers focus on their value-add and makes integration a breeze while enabling a broad range of Smart Home and Smart Industry applications.

In addition to the STAR Otto microcontroller baseboard, the cooperation aims to deliver a range of Arduino shields that expand the functional possibilities. DSI-display and NFC-reader shields are planned for Q2 2016 and a Sensor shield is scheduled to be available in H2 2016. Moreover, several STM32 Nucleo expansion boards and software libraries, including those for environmental sensors and proximity detection, have already been ported to the Arduino Integrated Development Environment (IDE) and can seamlessly be used with the new STAR Otto baseboard.

“By adding ST’s broad family of industry-leading STM32 ARM Cortex-M-based microcontrollers to the Arduino universe along with a broad array of ST sensors and other components, makers will have at their fingertips the ability to design, build, and manufacture just about anything,” said Daniel Colonna, Marketing Director, Microcontroller Division, STMicroelectronics. “Because of the tremendous enthusiasm within the maker community for Smart Home and Smart Industry applications, we’re supporting those development efforts with our audio- and graphics-friendly STM32F469 MCU and other exciting products from ST broad portfolio.”

Arduino  is the world’s leading open-source software and hardware ecosystem. The Company offers IoT developers and Makers of all ages the ability to build smart, connected and interactive devices using affordable technologies.

“Arduino has grown by encouraging kids – from 10 to 100 years old – to learn electronics and programming to make projects by building on the learnings of others and now we’re excited to add the STM32 family into the Maker community, to broaden learning with new features such as audio input/output and touchscreen display control,” said Federico Musto, CEO & President of Arduino in Italy. “We fully expect commercial IoT companies to also use these new features to easily design new smart home devices and applications, or improve products that drive industrial automation and control.”