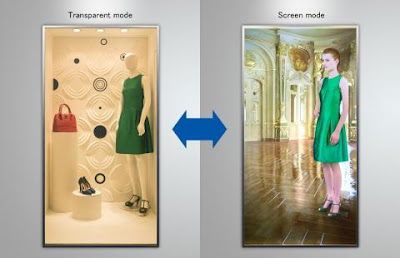 Panasonic will start shipping its high image contrast transparent screen that enables the use of glass, such as shop windows, as digital signage next month.

The system includes a unique glass (XC-CSG01G) with a high contrast light control film placed in between two sheets of glass, which when voltage is applied changes from the screen mode to the transparent mode, as well as the XC-CSC01G-A1 control box.

Images are projected (from the rear) onto the glass during the screen mode. The control box will synchronously operate the projector and the screen per the image content, and change the screen from transparent mode to screen mode. During the transparent mode, it will serve as a shop window showcasing products and exhibits, and during the screen mode it can reproduce high resolution images on the glass to introduce information about new products or about various campaigns during the sale season, helping transform the show window into an even more captivating environment. Multiple screens may be combined to create one large screen to create 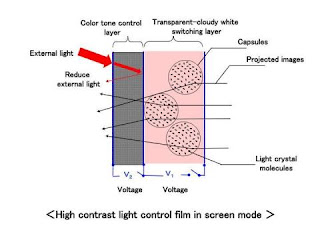 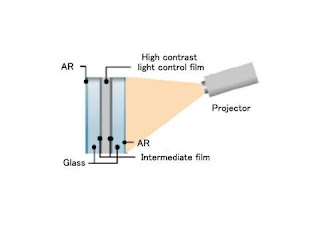 Traditionally, images have been projected onto cloudy white, electric switchable glass, but this type of glass was incapable of displaying high contrast images due to image degradation caused by external light.


Panasonic has combined glass with a high contrast light control film, which is comprised of a transparent-cloudy white switching layer containing special polymers and capsules and a color hue control layer. The color hue control layer will absorb a great deal of external light in screen mode, thereby significantly reducing image degradation and bringing to life high contrast images on par with digital signage, even in brightly lit environments.

Numerous screens may be combined horizontally, so for example, a 221-inch (16:9) screen measuring 4.9m wide and 2.75m tall can be created. The control box will switch between transparent and screen modes, control the projector, and turn ON/OFF the lighting in the exhibition space behind the glass.

The company has been working on this type of technology for several years:  Panasonic gives 3D gesture control to outdoor signs and industrial apps - video