By Nick Flaherty at www.flaherty.co.uk

Synaptics and NXP Semiconductor are using Arrow Electronics to distribute a variant of the Synaptics AudioSmart 2-Mic Development Kit for Amazon AVS that is supported by a commercially available NXP system-on-chip (SoC) application processor.

This variant enables device makers to quickly and cost-effectively integrate the Amazon Alexa Voice Service (AVS) into a fully functioning prototype, and then take that work into design for manufacturing and production.

“Voice as a human interface is rapidly expanding in smart homes and the broader IoT landscape due to the broad global expansion of voice services like Amazon Alexa,” said Saleel Awsare, vice president and general manager, Audio and Imaging Business, Synaptics. “When voice services are combined with Synaptics’ AudioSmart far-field voice DSPs, new voice-enabled human interface devices can accelerate into numerous IoT applications whether consumer, enterprise, or commercial.”
The Synaptics AudioSmart 2-Mic Dev Kit for Amazon AVS includes Synaptics’ CX20921 Voice Input Processor with a dual microphone board and a wake-word engine tuned to "Alexa." It is built on the pico-imx7d board, a purpose-built small-footprint hardware platform which features NXP’s i.MX7D dual-core applications processor optimized for the internet of things (IoT). The kit also includes stereo microphones with an integrated processor, a microphone holder board, a micro USB cable, Type-A to Type-B cable, cable assembly and a +5V power supply. 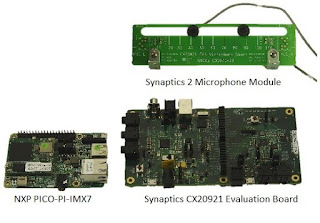 The i.MX7D has dual Arm Cortex-A7 cores at speeds of up to 1.2 GHz, as well as the Arm Cortex-M4 core. It supports multiple memory types including 16/32-bit DDR3L/LPDDR2/LPDDR3-1066, Quad SPI memory, NAND, eMMC, and NOR. Several high speed connectivity connections include Gigabit Ethernet with AVB, PCIe, and USB. Both parallel and serial Display and Camera interfaces are provided, as well as a way to directly connect to the Electrophoretic Displays (EPD).

“This new Synaptics development kit with an NXP SoC for the Amazon Alexa Voice Service can add intelligent voice control to connected products with a microphone and speaker, enabling developers and engineers to rapidly create Alexa-enabled proof of concepts and prototypes,” said Murdoch Fitzgerald, vice president of semiconductor marketing at Arrow.

The Synaptics AudioSmart 2-Mic Dev Kit for Amazon AVS with NXP SoC is available exclusively from arrow.com for $375.