As a sign that we may be reaching 'peak IoT', leading embedded technology market research firm IC Insights has reduced its forecast for shipments for the next four years.

Despite the increasing number of connections, IC Insights has trimmed back its semiconductor forecast for Internet of Things system functions over the next four years by about $1.9 billion, mostly because of lower sales projections for connected cities applications (such as smart electric meters and infrastructure).

Total IoT semiconductor sales are still expected to rise 19% in 2016 to $18.4 billion, as shown below, but the updated forecast reduces the market’s compound annual growth rate between 2014 and 2019 to 19.9% compared to the original CAGR of 21.1%. Semiconductor sales for IoT system functions are now expected to reach $29.6 billion in 2019 versus the previous projection of $31.1 billion in the final year of the forecast. 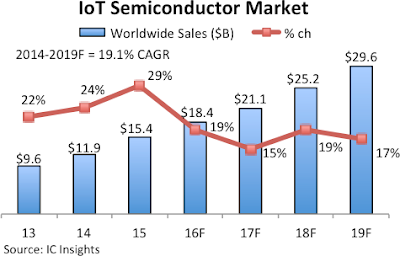 The most significant changes in the new outlook are that semiconductor revenues for connected cities applications are projected to grow by a CAGR of 12.9% between 2014 and 2019 (down from 15.5% in the original forecast) while the connected vehicles segment is expected to rise by a CAGR of 36.7% (up from 31.2% in the previous projection). IoT semiconductor sales for connected cities are now forecast to reach $15.7 billion in 2019 while the chip market for connected vehicle functions is expected to be $1.7 billion in 2019, up from the previous forecast of $1.4 billion.

For 2016, revenues of IoT semiconductors used in connected cities applications are expected to rise 15% to about $11.4 billion while the connected vehicle category is projected to climb 66% to $787 million this year.