We may laugh at users who use simple, weak passwords, but the Internet of Things is at risk as a result, and engineers are to blame

Symantec has revealed the top ten passwords for IoT devices. The weak passwords are opening up IoT device to hackers to use a botnets for denial of service attacks.
Using root and admin for passwords, along with classics such as '123456' and 'qwerty' leaves devices vulnerable. “For this reason, the prpl Foundation advocates for standards in for manufacturers and developers of IoT - in even the smallest of devices," said Cesare Garlati, chief security strategist for the not for profit prpl Foundation that is backed by Imagination Technologies. "Three basic principles to these standards are using open source - rather than proprietary software, forging a root of trust at the hardware level in embedded systems and exercising security by separation using hardware virtualisation, making it more difficult for criminals to get control." 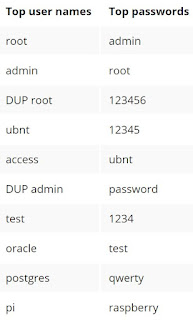