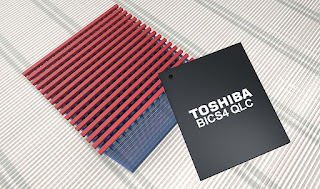 This also allows  2.66 terabytes in a single package through a 16-chip stacked architecture.

The progress in IoT and the demand for analysing and using that data in real time is expected to increase dramatically and this will require even faster HDDs and larger capacity storage from such schips says the company.

Toshiba Memory will start to deliver samples to SSD and SSD controller manufacturers for evaluation from the beginning of September and expects to start mass production in 2019.
Posted by Nick Flaherty