Over the last two years, the LPWA market has evolved from a chaotic rivalry between 15 wireless formats into a clear market with winners and losers. In their latest report, Mobile Experts lays out the two major market areas that are emerging: LoRa and NB-IoT. This will drive shipments to 700m by 2022.

"The most important distinction between different LPWA formats is not the technology. The business model has emerged as the most important way to segment the market," said Principal Analyst Joe Madden. "RF performance aside, some enterprises insist on control over their own networks. This is extremely beneficial to LoRa, along with a few other unlicensed technologies. LTE-M and NB-IoT benefit from basic choice to use an operator-based network. For customers that are willing to use a widespread network, the superior link budget of NB-IoT comes into play." 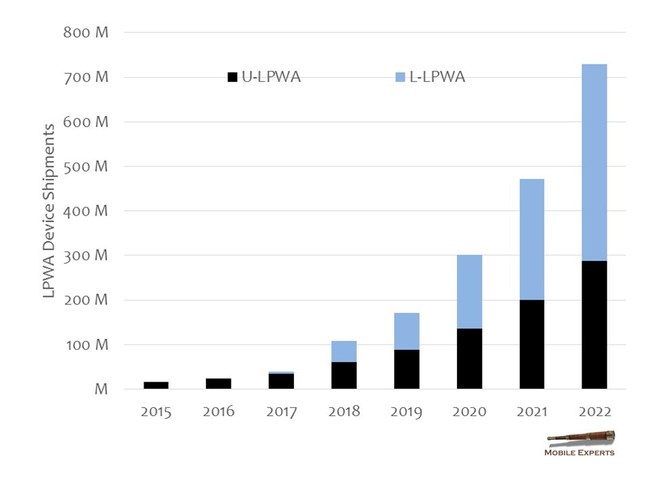 The report compares LPWA wireless formats in deep technical detail, comparing the main formats with regard to range, capacity, density of connections, battery life, and cost. Key vertical applications are:

The report also looks at how 5G IoT will come into play with LPWA applications, and forecasts the prospects for 5G IoT devices to add value where NB-IoT and LoRa devices are already entrenched.

"A few years ago, people began latching on to the idea of an interconnected society, referring to it as the 'Internet of Everything' in which a single network allows very diverse sensors and devices to interact with each other. In fact, we don't see that happening. Many smart applications have emerged, but they are using different networks, because customers are making independent decisions on network technology and devices—meaning the markets are growing more vertically instead of horizontally," said Madden.

Similarly researchers IDtechEX are also predicting a compund growth of 46% in low power networks to 2025, growing to 2.7 billion LPWAN IoT connections in 2029

To determine the number of IoT connections based on these protocols, now and forecast, one must look beyond the ‘smoke and mirror’ marketing of all these choices, with inconsistent and often inflated numbers of connections loosely given by proponents. This is due to each of the proponents being acutely aware that they need to be seen as the communication protocol of choice before potential adopters sniff loss of confidence and momentum, leading to an inevitable shake-out of some of these options.

The study looks at LPWAN and related technologies – including wireless local area networks and 5G as comparisons. By volume, licensed communication technologies such as NB-IoT and LTE will have more connections than unlicensed versions (such asLoRa and Sigfox) by 2021, despite entering the sector later.