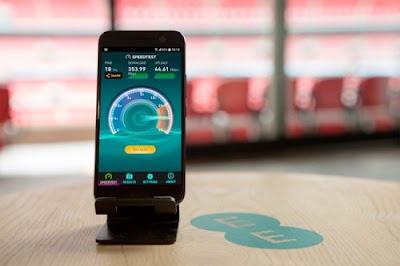 The demo saw live upload speeds of 110Mbit/s and download speeds of 750Mbit/s, more than twice as fast as the UK’s fastest commercial fibre broadband offering.

EE has switched on the latest upgrades to its 4G network in Cardiff and London’s Tech City, and will be rolling out to more major cities throughout 2017 and 2018. Real world speeds of 428Mbps were demonstrated in Cardiff City Centre on ‘Cat 9’ mobile devices such as the Xperia XZ Premium which was lunched last month.

“We are proud to support the development of commercial Gigabit LTE in Europe in conjunction with EE and Sony Mobile, enabled by the Snapdragon 835 Mobile Platform," said Roberto Di Pietro, Vice President Business Development, Qualcomm Europe. "Gigabit LTE is not simply about headline data download speeds, it’s about bringing real-life benefits to the everyday user, regardless of the device they are using right now and forms the first major step towards 5G. It is exciting to see the culmination of all these technologies coming to life in Europe, as the first commercial devices capable of delivering this incredible user experience start to enter the industry.”

“Peak speeds get all the headlines, and their importance is simple: the higher the peak speed on our network, the better the average speed for every customer. And better average throughput means customers are doing more and getting their content more quickly and more consistently," said Tom Bennett, Director of Network Services and Devices at EE.

Gigabit LTE is enabled by LTE Advanced features including 4x4 MIMO, 3xCA (Three Carrier Aggregation) and 256-QAM higher order modulation. This is a key pillar for 5G as the high-speed coverage layer that co-exists and interworks with nascent 5G networks.