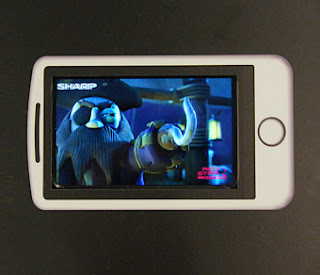 Sharp has developed a 3D touchscreen LCD for portable devices that has the industry’s highest brightness that can switch between 2D and 3D modes. Users can view 3D images without the need to wear special glasses, making this LCD ideal for mobile devices such as digital cameras, mobile phones, and smartphones, and there is speculation that it could be used for the next generation of Nintendo DS.
The newly developed 3D LCD uses a parallax barrier system to display 3D images. This parallax barrier, which has a series of vertical slits, is incorporated into an ordinary LCD to control the path of light reaching the right and left eyes, thus creating a sense of depth. However, the conventional 3D LCD with this system had difficulty in displaying high-quality images in 3D mode.
The 3D LCD developed by Sharp at this time significantly improves image quality by achieving both high brightness and low crosstalk through developments to its  CG-Silicon technology and optimization of the parallax barrier. This is an LCD process technology that uses high-performance, crystalline silicon with electron mobility up to 600 times faster than ordinary amorphous silicon and up to six times faster than low-temperature polysilicon that was developed jointly by Sharp and Semiconductor Energy Laboratory in Kanagawa, Japan.
Advances in the CG-Silicon technology have shrunk the wiring width within the LCD panel, allowing more light to pass and doubling the brightness (to 500 cd/m2, the industry’s highest) compared to the conventional LCD. In addition, optimizing the parallax barrier design has increased the efficiency of light, thereby dramatically reducing crosstalk. Also, the thickness of the LCD module is about the same as conventional 2D displays even though it is a touchscreen display. As 3D images can be displayed in both portrait and landscape screen orientations, it is aimed at mobile devices such as smartphones.
Sharp has also developed a non-touchscreen 3D LCD version and will start its mass production in the first half of fiscal 2010.