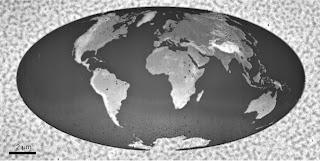 IBM researchers have created a 3D map of the earth so small that 1,000 of them could fit on one grain of salt. The scientists accomplished this through a new, breakthrough technique that uses a tiny, silicon tip with a sharp apex — 100,000 times smaller than a sharpened pencil — to create patterns and structures as small as 15 nanometers at greatly reduced cost and complexity. This patterning technique opens new prospects for developing nanosized objects in fields such as electronics, future chip technology, medicine, life sciences, and opto-electronics. 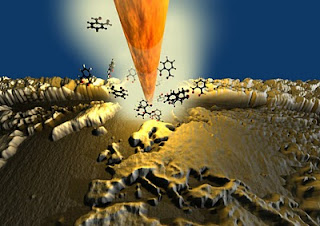 The researchers used a scanning probe lithography method based on the local desorption of a glassy organic resist by a heatable probe to demonstrate patterning at a half pitch down to 15 nanometers without proximity corrections and with throughputs (write times) approaching those of Gaussian electron beam lithography at similar resolution. These patterns can be transferred to other substrates, and material can be removed in successive steps in order to fabricate complex three-dimensional structures.