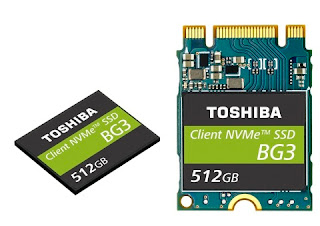 The devices is aimed at mobile devices with higher performance and a smaller footprint than traditional SATA-based drives. The DRAM-less design uses fraction of the power of other NVM Express2 (NVMe) SSDs3.

“Toshiba’s third generation BG SSDs were designed to not spark, but fuel a revolution in mobile and IoT computing,” said Jeremy Werner, vice president SSD marketing and product planning at Toshiba America Electronic Components, Inc. “The BG3 series is not only smaller and lighter, but smarter thanks to its cost-effective DRAM-less design with HMB technology combined with Toshiba 64-layer 3D flash memory with TLC technology. These SSDs enable OEMs to reimagine what’s possible for their customers.”
The BG3 series uses the Host Memory Buffer (HMB) feature in NVMe Revision 1.2.1 to maintain high performance without integrated DRAM by using host memory for flash management purposes. This allows devices to harness the performance of NVMe storage while maximizing footprint and affordability to deliver a next-generation mobile experience to end users.

“When it comes to the data centre, Toshiba BG3 series SSDs can help bridge the power and price gap between enterprise SATA and mainstream client NVMe SSDs,” said Neville Ichhaporia, director client and datacenter SSD marketing at Toshiba America Electronic Components, Inc. “Every data centre is pursuing ways to reduce both capital and operating expenses. The BG3 series addresses these concerns by providing boot storage with improved power consumption and a compact footprint at appropriate capacities.”
The  BG3 series is available in 128GB, 256GB, and 512GB capacities8. All three models are available in a surface-mount BGA (M.2 1620) or a removable module (M.2 2230) form factor for platform design flexibility.

Update: The technology is being used in new SSDs with 30.72TB in a 2.5-inch form factor.

The TMC PM5 series uses the MultiLink SAS architecture for the first time to provide up to 3,350 MB/s of sequential read and 2,720 MB/s of sequential write in MultiLink mode and up to 400,000 random read IOPS in narrow or MultiLink mode. The 4-port MultiLink design is an additional technology to achieve high performance, close to PCI EXPRESS (PCIe) SSDs, enabling legacy infrastructures to increase productivity without having to be re-designed.