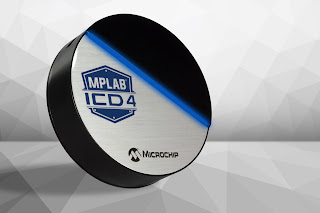 Microchip has launched an in-circuit programming and debugging development tool for its PIC microcontroller and dsPIC digital signal controller portfolios. The MPLAB ICD 4 includes all the features of the MPLAB ICD 3 debugger while adding increased speed through a faster processor and increased RAM.

The MPLAB ICD 4’s significant improvement in speed is accomplished through a 32bit MCU running at 300 MHz. This, combined with an increased buffer memory of 2 MB, results in a product that is up to twice as fast as its predecessor.

The puck-shaped debugger is housed in a durable, black case with a brushed aluminium top and is accented with an LED light strip to indicate debugging status. The tool has a wider target voltage range, from 1.20 to 5.5 V, as well as an optional 1 Amp of power when using an external power supply.

There is a selectable pull-up/pull-down option to the target interface and a configurable interface speed for optimised programming and debugging as well as support for JTAG debug.

The MPLAB ICD 4 supports all PIC microcontrollers and dsPIC digital signal controllers in Microchip’s portfolio through the MPLAB X Integrated Development Environment (IDE). This simplifies the design process for customers when they choose to migrate from one PIC MCU to another to meet the needs of their application.