Researchers in Spain have solved the problem of stiction in MEMS accelerometers by making smaller sensors. It has used a standard 180nm process to design accelerometers with s.tructures as small as 3nm

"Our first silicon nano-sensor samples from GLOBALFOUNDRIES exceeded our expectations showing outstanding resilience to stiction, with the devices going through more than 10,000 switching cycles, each equivalent to more than 1000G shocks," said Nanusens' CEO, Dr Josep Montanyà i Silvestre. "And the sensitivity is an order of magnitude above what is needed for a motion sensor in most applications."

The problem of stiction in MEMS is caused by attractive forces that occur on microscopic levels such as Van der Waals and Casimir. These are surface area dependant and not mass dependant. In an inertial sensor design, there is a proof mass connected to a spring. This mass moves when there is an acceleration and the movement is detected by the mass acting as one electrode and the change in capacitance is measured relative to a second fixed electrode.

However, if there is a large movement such as from a shock or collision, the mass goes beyond the normal range of travelling and touches a surface enclosing the sensor where it 'sticks' due to the attractive forces and stops working. This can be countered by having stronger springs but this reduces the sensitivity of the sensor. A solution to increase the sensitivity could be to increase the mass but this results in a greater surface area for the mass and so, unfortunately, more attractive forces. 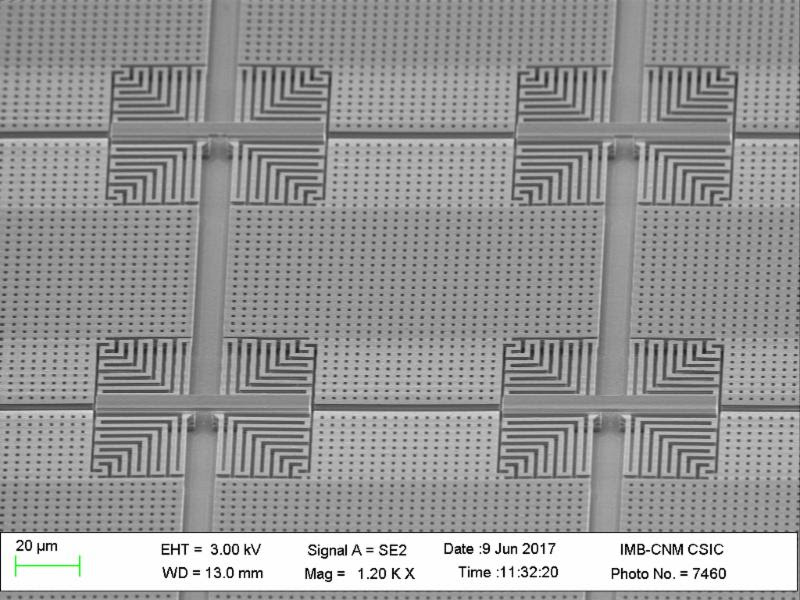 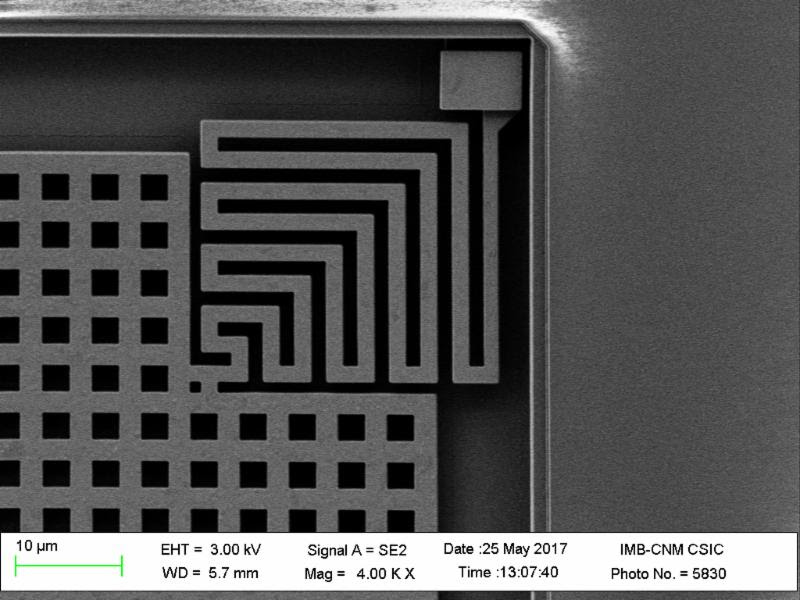 Close up of spring


The approach used by Nanusens is to reduce the sensor design by an order of magnitude from Micro ElectroMechanical Systems (MEMS) with linear feature sizes of 1-2um to Nano ElectroMechanical Systems (NEMS) where the features are 300nm. This reduces the attractive forces significantly as the surface area reduction is in two dimensions, i.e. almost two orders of magnitude reduction. Reducing the proof mass could result in decreased sensitivity except this is offset by reducing the gap between it and the fixed electrode. The size reduction also means that the energy stored on the proof mass when it hits the surface in case of a shock, it is much less and the travelling gap is also small. A shock with less energy is also easier to detach.

The new nano-sensors are made using standard CMOS processes and mask techniques. The Inter Metal Dielectric (IMD) is etched away through the pad openings in the passivation layer using vapour HF (vHF) to create the nano-sensor structures. The holes are then sealed and the chip packaged as necessary. As only standard CMOS processes are used, and the sensors can be directly integrated with active circuitry as required, the sensors can potentially have high yields similar to CMOS devices.

Nanusens has perfected this CMOS nano-sensor technology over the past year based on developments that the key staff had done when working at Baolab Microsystems, which closed in 2014.

"Nanusens decided to partner with GF to develop its nano-sensors due to the outstanding technical expertise and quality of service received from their teams, together with such a large variety of CMOS nodes where we plan to move some of the devices in the future including many RF options," said Montanyà "In addition to this, producing our nano-sensors at GF, with their huge volume capacities that keep growing due to their continuous investment in their global footprint ensures that Nanusens will have all the required production capacity that it will need in the future, and that there will never be a shortage in supplying our products to the customers. This large volume capacity is key to serve the consumer market, where demand can fluctuate very quickly, and there can be unexpected peaks."