The semiconductor industry has seen its best ever quarter, driven by the revival in the US market but highlighting the cyclic nature of the business. The graph highlights that we potentially have several quarters of strong growth ahead, driven largely by the Internet of Things and Industry 4.0 as well as automotive systems. 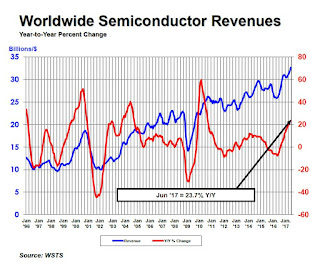 "The global semiconductor industry has enjoyed impressive sales growth midway through 2017, posting its highest-ever quarterly sales in Q2 and record monthly sales in June," said John Neuffer, president and CEO, Semiconductor Industry Association. "Sales into the Americas market were particularly robust in June, and all regional markets saw growth of at least 18 percent year-over-year. Conditions are favourable for continued market growth in the months ahead."

This comes as the higher price of DRAM has driven Samsung to overtake Intel as the world's largest chip maker.